Home/News posts/In this refugee camp, everyone can share their story with Selo

Source: this is an English translation of the article ‘In het kamp kan iedereen bij Selo zijn verhaal kwijt’ by Marieke Buijs, that was published in the Dutch newspaper NRC Handelsblad on 4 May 2020. The newspaper, the author and the photographer gave kind permission to publish this translation.

Humanitarian aid: a vanguard of aid organizations is trying to offer psychological aid besides food and shelter. This is offered by people who often have fled themselves. 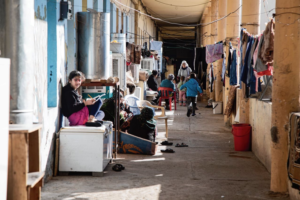 In this shelter in Iraq, Falak Selo, a refugee herself, aims to provide psychological aid to people who need it. Among other things, she has set up a discussion group. Photo: Seivan M. Salim.

Fat drops hit the windows of a conference room in the Kurdish-Iraqi city of Dohuk. Four women and five men are sitting on a satin-covered table, on their third day out of eight of a course about cognitive behavioural therapy for beginners. The students fled Syria. Some of them live in tents and can barely escape the rain outside. That is why the heating is at an intoxicating 28 degrees.

“Our psyche is like a spring”, indicates psychiatrist Yousif Ali Yaseen, working for the directorate of health. “Bad experiences and worries put tension on that spring”. Yaseen explains that tension is an appropriate physical response to threatening situations, but that it becomes problematic when this becomes chronic. “Breathing can help release the tension from the spring”.

The trainees slide their fake suede chairs together and start an assignment in pairs. “Put your hands on your stomach and inflate it as if it were a balloon”, repeats student Falak Selo from Yaseen’s instructions. It results in awkward laughter from her fellow student. With the second attempt, Selo has more peace in her voice. “In. One, two, three. Well done. And slowly exhale. Two, three”.

These trainees form a special vanguard in international humanitarian aid. In the last couple of years, the World Health Organization (WHO), among others, has endeavored to not only provide food and shelter for people in need, but also to provide psychological aid. The Dutch minister Sigrid Kaag (Foreign Trade and Development Cooperation, D66) is also committed to this. “If I want to make a difference around one issue during my tenure as a minister, then it would be on this topic”, she stated at the International Conference on Mental Health and Psychosocial Support in Amsterdam last fall.

But how can offering such support be organized? 85 percent of approximately 80 million displaced people worldwide reside in developing countries, with often only a few psychologists. Iraq has about 80 clinical psychologists, while the country hosts 245 thousand refugees and 1.4 million internally displaced persons on a population of around 40 million. To compare: the Netherlands has around 2.300 clinical psychologists and a population of 17.4 million. While it may be possible to  fly in medical specialists to perform a particular  medical procedure, such as surgery, this is not so easy in the case of psychological therapy for which it is essential that practitioner and patient understand each other. Therefore, flying in psychologists  makes little sense.

In order to be able to provide psychological aid, organizations such as UNHCR and Save the Children are committed to training lay people. People who interact well with others whether they are teachers, bus drivers or aspiring philosophers. Often they are people who have fled themselves and live in the same camps as their ‘patients’.

Two days after the stress management class, student Falak Selo arrives at the doors of a castle that served as a prison for political dissidents during Saddam Hussein’s administration between 1979 and 2003. Now, Selo lives here with her sister, their mother and other 1.048 other Syrian refugees. At the shelter, close to a mountain range in the northern city of Akre, dark corridors with thick walls lead to living areas where daylight barely enters.

On her phone, Selo has a list of names of women who participate in the mother’s support group she leads. She goes around to drum up the participants. In the gallery a woman is rinsing a carpet. “How is it going?”, Selo asks to start a conversation. On a sidewalk, a few steps further, Selo joints three women. Today a radiant sun lures residents to the courtyard. Children are swinging in a playground, the smell of overflowing waste containers is dispelled by that of endless lines of clean laundry.

An hour later, twelve mothers are seated around a radiant heater in a shack. With an eye on their children who are playing, they pour their hearts out. They describe confrontations with frustrated adolescent sons. They talk of children that are constantly on their phone, because they have nothing left to do other than school. They discuss lack of sleep because of altercations their neighbours.

The discussion group shows the power of Selo as an expert by experience. She sympathizes and has empathy for the concerns of all the mothers. She makes contact easily when going door-to-door. Outsiders have no idea what it is like to completely lose control of your future, to be trapped in an old, dark prison for years.

“I wanted my daughter to become a contemporary Plato”, Selo’s mother said – wearing a headscarf, traditional tattoos on chin and forehead – from her bed under the lattice windows in the family’s room. Selo was studying Philosophy in Damascus when in 2013 the civil war reached her family living near the Turkish border. “My sister takes care of my mother”, Selo says, “for this reason I stopped my studies and jointed them to make some money”. She works as a community worker, someone from the refugee community who fulfills all kinds of roles. 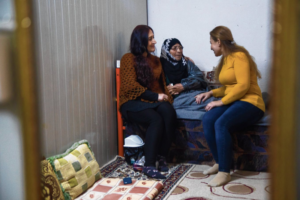 The “treatment method” taught by Selo is called Problem Management Plus. The therapy was developed by the WHO and can be provided by lay people using a strict protocol, while a formal diagnosis is not required. The ingredients: relaxation, engaging in activities, breaking down problems into manageable pieces and activating  social networks. They can help with trauma, anxiety, stress and depression.

A pie chart of your feelings

Experts through life experience are also used to improve the psychological well-being of children. In a classroom at the Gawilan camp, twenty children frantically clap their hands on their thighs in a complicated, accelerating rhythm. Craftwork decorates the room and on the tables are pencils, markers and clay. The camp, about a two-hour drive from Dohuk, is home to nearly 10,000 Syrian refugees. Provisional stone houses are brightened up with paintings,  there are some trees and next to a school there are playing fields where children can let off steam.

Economist Abdul Samad Ahmad fled northeastern Syria and has lived in Gawilan since 2013. He gives creative therapy here for the NGO Save the Children. After the children have expended some energy playing, he instructs them to draw a pie chart: a pie chart of the feelings they have at that moment. A lot of them are in discussion. Two girls come up with an identical representation in purple, blue, black and red of their apparently identical feelings: sadness, anger, joy and hope. Ahmad instructs them to form a circle and invites them to, one at the time, explain their drawings. A shy boy takes initiative. “I’m happy because we don’t have school this week”, he says. His comment resulted in cheerful laughter. “And I’m angry because my cousin died last week”. Ahmad puts a hand on the boy’s shoulder. The group is silent.

“In the Middle East, feelings are not easily discussed”, states Ali Mahmood, who supports mental health care with the International Medical Corps. “Discussing personal issues can feel as a betrayal of a partner or family. Peers are usually good in sensing and understanding such sensitivities”. The pie chart of feelings offers an accessible exercise in discussing feelings. “We will repeat this drawing assignment in the coming weeks”. Ahmad’s lesson is coming to an end, along with the attention of his now restless audience. “In the end, we put the pies side by side and you will see that feelings come and go. One moment you are happy and hopeful, the next moment you are feeling sad”, he concludes with one of the principles of mindfulness.

For the eleven-year-old shy boy, the pie chart of feelings has more to offer. He is planning on repeating the lesson for his brothers and sister. “In this way, they can also learn that feelings come and go”, he explains somewhat dutifully.

The current catch-up is necessary because (Western) aid providers have ignored people’s psychological aid needs for decades. During the first half of the last century, it was thought that only the “refined” Western mind could suffer from depression. Decades later, the idea that people in fragile countries or conflict areas mainly suffered from injustice or poverty and not from trauma prevailed. 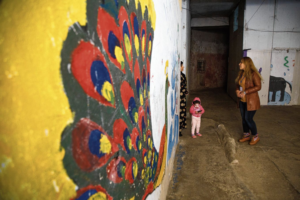 Partly because of her own experiences, Selo effortlessly makes contact with many residents.
Photo: Seivan M. Salim.

This idea only started to prevail in 1990, when Harvard scientists provided an overview about the global burden of disease. People in low-income and conflict areas appeared to have also been suffering from mental health problems. According to the most recent WHO estimation, almost a quarter of all people in conflict settings suffer from anxiety, depression or other mental health problems.

Trained lay people are now the backbone of mental health international aid programs. Their work seems to be effective. The Problem Management Plus treatment method has been thoroughly investigated, as for instance in a Pakistani conflict area. Here, 90 percent of the 306 tested people had depressive feelings at the start of the intervention. Afterwards, that dropped to 30 percent, while 60 percent of the control group continued to feel depressed.

But there is also criticism. “Have no illusions”, said participant Rojeen Khalil at the end of the mother’s group. “We can talk as much as we want, but our problems won’t be solved as long as we live here. What happens to our children depends on the home we can give them and how much safety and education they have.” “It is indeed good to discuss our problems”, she continues, “I feel better afterwards”. The cynical explanation is: psychological aid is a sop to appease people living in inhuman conditions.

Advocates for psychological emergency aid, such as German-Kurdish professor Jan Kizilhan, recognize the essential step in aid to recover. For the individual and thus for the society. Kizilhan: “In a cycle of war, hatred and violence, psychological aid is crucial. Without spiritual and mental recovery, there is no room for forgiveness and peace”.

When Selo, seated at her mother’s feet, tells about a teenage girl in the camp who was withdrawing and not going to school anymore, it is clear that Selo herself benefits from providing aid to others. She talked on a regular basis with the girl for months. “Now she is going back to school and taking part in life”.

Selo gets emotional. “I have lost my future and I will never become a philosopher. But when I meet the mother of that girl, she greets me in a very warm way, and I am grateful for that. I can mean something for the future of others, and that makes me proud”.